Special Programming -- A Time for Singing

Ann Shaffer continues a beloved tradition on her program "A Time for Singing." For the 27th straight year, she'll host the WTJU Christmas Week broadcast of Englebert Humperdinck's opera, "Hansel and Gretel." This special broadcast can be heard on WTJU 91.1fm Tuesday, December 29 from 7-9 pm, or online at wtju.net.

Englebert Humperdinck composed this fairy tale opera in 1892, at the urging of his sister, Adelheid Wette. She had written the libretto for the Hansel and Gretel story for a children's Christmas production, and asked her brother to provide the music. The rest is history.

Richard Strauss conducted the premier on December 23, 1893 and the work has always been associated with the holiday season.

Ann Shaffer will guide you through the opera, providing insightful commentary on performers and the production.
Posted by WTJU Classical Dept. at 12:40 PM No comments:

Special Programming -- The King of Instruments

Sunday, Dec. 27 beginning at 6 PM, Deborah Murry hosts a special edition of "The King of Instruments." Aired exclusively on WTJU, 91.1fm (and streamed online at wtju.net), the program showcases a variety of Christmastide choral favorites that are sure to bring warmth to the holiday. Will this favorite carol be on the program?

You'll just have to tune in to "Evensong for Christmas," on "The King of Instruments."
Posted by WTJU Classical Dept. at 1:02 PM No comments:

Special Programming -- Portrait of the Artist

Wednesday, December 23 at 5PM Jenny Wyss hosts "Portrait of the Artist." This special edition features the Weihnachtshistorie, or Christmas Story, by Heinrich Schutz. You can hear this program broadcast on WTJU, 91.1FM Charlottesville, VA, or online at wtju.net.

Schutz was widely regarded as one of the most prominent German composers before Johann Sebastian Bach. When he composted his "Weihnachtshistorie," Schutz poured all of his contrapuntal and choral writing skill into it, creating a breath-taking work with choirs and soloists playing the parts of angels, wise men, narrators, and even King Herod! And all of it reinforced by a large ensemble that includes organ and brass.

Posted by WTJU Classical Dept. at 1:28 PM No comments:

Email ThisBlogThis!Share to TwitterShare to FacebookShare to Pinterest
Labels: Portrait of the Artist, special programming

The work consists six parts, one for each of the six feast days of Christmas. This massive oratorio was premiered on Christmas day, 1734 in Leipzig. Although meant to be performed over several Sundays, the organization and overarching structure of the music indicate that Bach thought of the "Weihnachtsoratoirum" as a unified whole.

Which is just the way Deborah's going to present it!

Posted by WTJU Classical Dept. at 1:54 PM No comments:

Special Programming -- The King of Instruments

Sunday, December 20 at 6PM, host Michael Latso presents a very special one-hour edition of "The King of Instruments." The program can be heard on WTJU, 91.1FM in Charlottesville, VA, and online at wtju.net.

Michael will feature one of the most famous and popular virtuosos of the organ, Virgil Fox in a holiday-themed program. Fox made several recordings of Christmas carols, all of his own arrangement (of course). This will be an exciting hour of organ music with plenty of fireworks! (Below is a small sample)

Some of the arrangements come from a stupendous recording made in 1965 and released as Command Classics CC11032SD at the Church of St. Paul the Apostle in NYC, the founding church of the Paulist Fathers, which was the first men's religious order established in the United States. The organ has been redone since then and its history can be found here: http://www.nycago.org/Organs/NYC/html/StPaulApos.html. Among its features is a great reed stop "en chamade," or vertically projecting from atop the organ case; it's called the "Paulisten Posaune," or Paulist Trumpet, and is put to grand effect Fox. Listeners will be amazed as I am every year I listen anew.

Posted by WTJU Classical Dept. at 3:19 PM No comments: 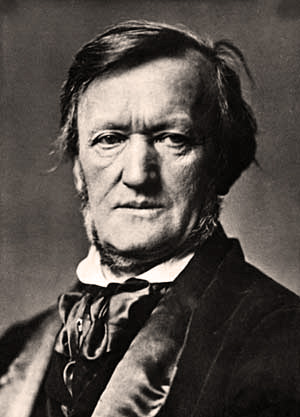 “I am convinced that there are universal currents of Divine Thought vibrating the ether everywhere and that any who can feel these vibrations is inspired.”t

The Bard of Bayuth may have been on to something. Last post I noted the Duke University study that indicated that music may be an outgrowth of our physical makeup -- a natural rather than a cultural construction. As Dale Purves, one of the researchers explains:

"Any perceptual quality you have is there for some biological reason. They evolved because they provide useful information to us. So if you take a microphone out in nature and ask what the tonal sounds are in our environmental niche that we would have evolved to appreciate, the tonal sounds you record are nearly all animal vocalizations. And the ones that count the most are the vocalizations of other humans."

This study is important because it resolves a current debate on the role of the hippocampus in retrieving memories. Some have argued it is the strength of the memory that matters most in retrieval. We have shown it is actually context that activates the hippocampus.

That's the concept behind the oldies format. And, I think part of the reason people return to traditional carols and songs in December.

Putting the two studies together, one could reach this conclusion. We have a deep emotional reaction to a performance of a symphony because the music resonates with us on a physical level. And when we play a recording of that work later on, we can relive that excitement again and again.

Now those are inspired vibrations.

Email ThisBlogThis!Share to TwitterShare to FacebookShare to Pinterest
Labels: music and the brain, Ralph, research

Two recent studies by Duke University suggest that music isn't just a pleasant diversion. Rather, it's something hardwired into human beings, and is an extension of the way we communicate.

I know, nothing new to anyone moved to tears or brought to the edge of their seat by a great work or exquisite performance. But the findings are interesting, nevertheless.

According to Science Daily, the first study showed that "the musical scales most commonly used over the centuries are those that come closest to mimicking the physics of the human voice." 16th Century madrigalists were intuitively familiar with this concept, as were most opera composers. The study suggests that our major/minor scale system (and the scales of other musical cultures) closely resemble the sounds human vocal cords can produce.

In other words, all of the notes in all of the scales that we regularly use can be hummed. And the microtones that haven't been used in traditional scales are missing because they can't.

The second study looked at the emotional content of music. It found (again, not surprisingly) that music mimicked speech patterns and inflections to give it emotional color. And that color was effectively communicated.

As research team leader Dale Purves said, "Our appreciation of music is a happy byproduct of the biological advantages of speech and our need to understand its emotional content."

Happy, indeed.
Posted by WTJU Classical Dept. at 6:29 AM No comments:

For some, a blog is a personal online journal. Actually, that was it's original function. The origin of the word "blog" is a combination of "web" and "log."

Jennifer Rivera is one such blogger. Her posts outline the trials, tribulations, thoughts and adventures of her life -- as an opera singer. If you ever wondered what goes on behind the scenes at an operatic production, or what the life of a professional singer is really like, this is a great place to start.

Rivera writes in a very accessible and non-technical style that sometimes reads more like a letter to a friend than a public posting. For example, here's Rivera talking about that most awkward piece of stage business -- kissing a fellow actor.

Then there's the situation where you are kissing each other and holding it until the blackout. When the lights are on you and you're onstage, you are in your characters, so it's no big deal. But when the lights go out, you're suddenly yourselves again, so how do you extricate yourself from kissing without it being weird? I've noticed I almost always do the same thing. I always pat the guy (or girl if I'm playing a boy) on the back like "hey champ, good job there" as soon as the lights go off. Have you ever seen two straight guys hug and do the "straight guy back pat"? That's what I do. I'm surprised I don't ruffle their hair or punch them on the arm.

Rivera also provides interesting insights on the art of singing, and opera performance. Like this:

Ah, una voce poco fa, Rosina's entrance aria - I have a love hate relationship with you. You start so low and dip down to very low chest tones, then move around frantically with tons of coloratura (and especially with the crazy ornaments I do) and then leap up to a high sustained B natural at the end. Plus, other than the few lines of recit in the first scene, it's the very first thing Rosina does, so you don't have time to calm yourself down by singing other easier things. But at the same time it's a wicked fun aria to sing, and there are endless possibilities, so even after thousands of renditions, I am never bored with it. But it usually freaks me the eff out.

Accessible, appealing, and a fun and fascinating read. Jennifer Rivera's Trying To Remain Opera-tional is one blog I read regularly.
Posted by Ralph Graves at 6:57 AM No comments: