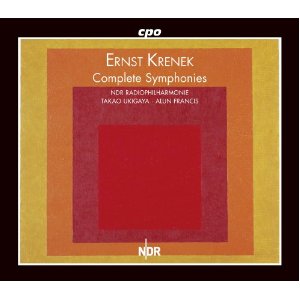 It took a while but CPO finally issued the last installment of their cycle Ernst Krenek symphonies. Krenek is best known for his Weill-like opera Johnny Spielt Auf, a product of the Weimar years. It’s not really a fair representation of Krenek’s style.

He was much more interested in the atonal compositions of Schoenberg and Webern, and that interest is reflected in his orchestral compositions. The first symphony (1921) is neo-romantic, reflecting the influence of his teacher, Franz Schreker. But even in this work, the harmonies have a slight edge to them, and it’s easy to hear where Krenek wants to go.

The second symphony (1922) is more aggressively atonal, but there are still lyrical post-romantic elements there that keep the work sounding a little more conservative than Weber. The third symphony (also written in 1922) has Krenek coming into his own as a composer, and even though it could be classified as atonal, there’s a compelling logic behind the work that makes it more than just an academic exercise. The harmonies, though dissonant, are expressive, and the symphony’s charged with energy.

The fourth and fifth symphonies have no elements of the early Krenek’s style. And yet, while they encompass the most modern aesthetic of the day, they have a surface organization and coherence that isn’t as readily apparent in other atonal composers of the 1950’s.

All in all, these five symphonies are an exciting body of work. Each composition has its own character. Although Krenek kept pace with the avant garde, each work is unmistakably in Krenek’s compositional voice, providing a continuity across the set.

An additional treat are the fillers – the Concerto Grosso No. 2 and Potpourri show a more relaxed and more lyrical side to the composer. Krenek chose to write atonal music, but these works show he had the skill to be melodic when he wanted to. A fine set that should do much to raise Krenek’s profile.
Posted by Ralph Graves at 5:11 PM No comments: Links to this post

"Fathers and Sons of the Bach Family" 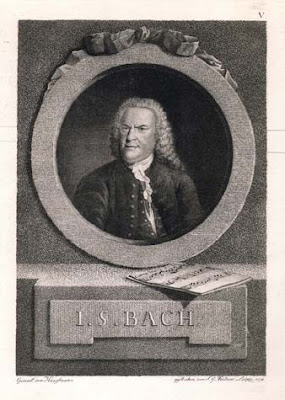 Father’s Day is this Sunday, 17 June. To mark the occasion, on Classical Sunrise that morning (6 to 9 AM), I’ll be doing a show titled “Fathers and Sons of the Bach Family.”

Of course you can expect to hear music of Johann Sebastian Bach and his sons, but I will also be featuring works from other lesser-known members of this extraordinary family. The Bach line of professional musicians spans over six generations.

According to the family chronicles, Veit Bach, a baker by trade (d. ca. 1576), was the forefather of this dynasty and the first to show musical proclivities. His son Hans (d. 1626) was the first known professional musician, and his three sons in turn established different branches of the Bach family of musicians.

In my mind, no day is complete without the music of JS Bach, and with 20 children to his name (10 of which survived to adulthood), JS Bach is perhaps the musical epitome of Fathers and Sons.

So tune in to Classical Sunrise this Sunday, 17 June 2012, on WTJU Charlottesville, 91.1 FM, and streaming live on www.wtju.net, to celebrate the music of the most important family in the history of Western music.

And if you missed the program, you can hear it again on-demand anytime over the next two weeks at our Virtual Tape Vault.

Posted by Deborah Murray at 3:36 PM No comments: Links to this post

For those who missed this season's Ring cycle at the Metropolitan Opera, take heart. You didn't miss much. Wagner's titanic four-part saga of the downfall of the gods in the Met's new production by Robert Lepage was a mostly depressing and vapid affair. It illustrates what can be accomplished when a virtually limitless budget is applied to realize a production that has no original ideas.

Wagner's great creation, of course, is mythical in conception and monumental in execution. Because it is mythical there is no reason for the Ring to be staged in the German woods and forests, even though the Rhine plays a central role in the tetralogy. The Rhine could be any river, and it is nonspecific to Germany. The Ring has been staged with great success in the forests of the American Northwest by the Seattle Opera, and less successfully by Francesca Zambello in the American West for the joint Washington/San Francisco production, among others.

Still, there must be some thought behind a production of the Ring other than "what can I do next with this absurd stage machinery that I have created?" Lepage's stage contraption, known to the Met's General Director Peter Gelb as "the Machine," is a collection of large panels that rotates and revolves on the same axis. The singers in the cast, whose primary job after all is to sing Wagner's stupendously difficult music, spend much of their time trying to avoid being flattened by the Machine.

Occasionally there are impressive moments, as when the gods cross the rainbow bridge to enter Valhalla at the conclusion of Das Rheingold or when Wotan and Loge descend into Nibelheim to confront Alberich and seize the ring of power. One of the great challenges in all opera is staging the end of the world that concludes Die Götterdämmerung. Lepage's realization of that cataclysmic event is so tepid, even foolish that the Met audience was left tittering at the absurdity of it.

The singing in the principal roles was adequate, which is accomplishment enough in this era so lacking in great Wagnerian voices. Still, the singers deserve great credit in making something musical out of the antics they were often asked to perform. Meriting special distinction were Stephanie Blythe's Fricka and Eric Owens' menacing, hate-filled Alberich. Bryn Terfel as Wotan and Deborah Voigt as Brünnhilde, although both are among our most distinguished singers, were simply miscast. Jonas Kaufmann may yet be one of our great Siegmunds, at least for those who remember Placido Domingo's peerless portrayal of that doomed character. The Met Orchestra played with distinction for Fabio Luisi, although the special fire that is lit in Wagner by James Levine was absent.

Some say this Ring was conceived by the Met with HD broadcast in mind. The New York critics seem generally to agree that this Ring was even less compelling in the theater than on the big screen. The Met's HD broadcasts present great promise for the company, but they also may put the in-house theatrical experience at risk.

This reviewer finds the Met in HD broadcasts generally unsatisfying, although for an out-of-towner, they are better than not being able to see the Met's productions at all. Next year is the Wagner bicentennial, and one can only hope that other companies with the resources to stage the Ring will do better than did the Met, even if they have fewer financial resources at their disposal. Come to think of it, maybe throwing fewer dollars at Lepage's Ring would have made it less undisciplined and ultimately more successful.
Posted by WTJU Opera at 10:01 AM No comments: Links to this post