The big news this past weekend was the prediction that the Rapture would take place on Saturday, at 6:00pm local time. For those not fully up on Christian theology, the Rapture is when God gathers the elect up from earth to spare them the tribulations that are to come. For some, this is the sign that the Apocalypse is about to start.

One of the more interesting threads on Twitter bore the hashtag #apocalypsemusic. It was a series of suggestions for music appropriate to the event. For a while, the thread was hijacked by classical music folks, and several suggestions -- both obvious and subtle -- made their way into the conversation. (Some blogs also took up the task and made some good suggestions - see Miss Music Nerd's column for example).

So what would be appropriate classical music for the Rapture and the coming Apocalypse? Here are some of the best suggestions from the postings. What would you add?

Hector Berlioz - "Dies Irae" from the "Symphonie Fantastique" ("Dies Irae" means "Day of Wrath, and is part of the Latin funeral mass that references the Judgement Day. Most any Dies Irae from any Requiem would probably work, too.)

Olivier Messiaen: Quartet for the End of Time

Franz Schmidt: Das Buch mit sieben Siegeln (The Book of the Seven Seals) (an oratorio based on a key part of Revelation)

And I had a few suggestions myself:

Leos Janacek: The Diary of One Who Disappeared

Edward Elgar: Dream of Gerontius (tracks the journey of the soul after death)

Franz Joseph Haydn's "Farewell" Symphony (Symphony No. 45) (If you prefer to leave quietly rather than with a bang)

Ralph Vaughan Williams' "Toward the Unknown Region" (Everyone was ready to leave Saturday, but to go where?)

Charles Hubert Parry: Symphony No. 1 "From Death to Life" (Which is how Christians view death)

I understand the event's been rescheduled for October 21. So there's plenty of time to send in your suggestions. Maybe we'll have a special show that day...
Posted by Ralph Graves at 7:59 AM 1 comment: Links to this post 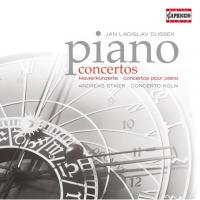 Jan Ladislav Dussek as a brilliant pianist, and an accomplished composer. Like is contemporaries Mozart and Haydn, he strove for a clean structure in his music, even as his piano technique became more complex and expressive.

This re-release from Capriccio features two of Dussek's piano concerti, plus an additional oddity for piano and narrator (!). Pianist Andreas Staier is backed by the Concerto Koln. Staier performing on a fortepiano of the period. It's a good call -- on the fortepiano, you can hear the instrument being pushed to its limits. On a modern piano, with its wider range and more durable action, the solo passages would come off sounding a bit more sedate, I think.

The disc opens with Dussek's Concerto in G minor, Op. 49 from 1801. While the structure owes much to Haydn, the harmonies and solo passages look ahead to the piano works of Schubert.The orchestration is fairly perfunctory, but that's a common trait for works of this period. The ensemble was there to back up the soloist, not share the glory!

Although seemingly simple in construction, the melodies often take some unexpected twists and turns, especially in the slow movement. This concerto doesn't have the thundering pronouncements of Beethoven, but it is music by a master of the instrument speaking in a more refined, but nonetheless emotionally expressive voice.

The second work on the disc, the Piano Concerto Op. 22 sounds Mozartian -- and no wonder. Dussek wrote the work in 1793, when Mozart's concertos were well-known (and before Beethoven really got going). Once again, the structure of the piece is clean, while the piano falls all over itself in tumbling scales and arpeggios. But there's a purpose to it all. Dussek crafts some engaging music while he's dazzling us with his technique.

I have to admit I found the last work on the albut a little off-putting. The Tableau “Marie Antoinette” is a recitation (in French) of Antoinette’s demise with the scenes illustrated musically on the piano. Perhaps it works in live performance, but personally, I would have rather have just had the music and the text printed in the booklet.

Andreas Staier does a fine job. His technique is such that he pulls much more expression out of the fortepiano than many musicians can from a modern piano.

Tuneful and appealing -- recommended for the concertos.
Posted by Ralph Graves at 7:19 AM No comments: Links to this post 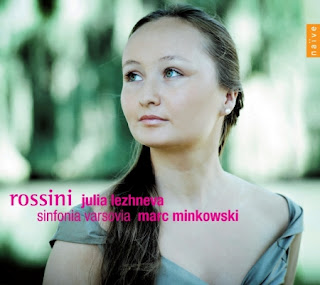 It is always a pleasure to hear a new and exciting voice. Julia Lezhneva, Dame Kiri Te Kanawa's 21 year-old protégé, has made her debut recital recording for the French label Naïve. The Sinfonia Varsovia is conducted by Marc Minkowski in six arias by Rossini. Lezhneva had been professionally performing since the age of 16 and won the Elena Obraztsova International Competition for young singers in 2007. She opened the Rossini Opera Festival alongside Juan Diego Flórez in 2008 and has given solo concerts at the Salzburg Festival.

As might be expected from a singer so young, the voice is fresh and commendably flexible. What cannot be determined is how large the voice is and whether it will show to good effect in the world's major opera houses. On this recital disc, the singing is uniformly excellent. Although the arias are for the most part taken from the mezzo repertoire, Lezhneva is a true soprano. Her voice is most effective in the middle to upper middle register. She has first-class technique and a winning style that serves her well in this repertoire. What is most striking is the musical maturity with which the arias are presented. The first cut, Tanti effetti from "La donna del lago," is particularly effective. Throughout the recital, trills, staccati, and other coloratura effects are immaculately executed.

Minkowski's conducting is supportive and flexible, but he never loses the pulse of the music. The playing of the Sinfonia Varsovia is also uniformly of high quality. The orchestral support in Rossini's Willow Song from "Otello" is especially sympathetic. As always, Naïve's digital sound is bright and clear, without the glare and etching that often makes digital sound so tiring. All in all, this disc introduces an exciting new artist.

Over the years I've talked to a lot of folks about classical music, and it seems like there's an unspoken rule that both the casual and hardcore listener share. There's an assumption that there's a single list of Great Music that has stood the test of time and that all pieces must be measured against (and usually found wanting).

I usually hear about this list when I air something a little too adventuresome (read: unfamiliar). Then I get the calls asking why I don't play GOOD music for a change! Well, the nature of my program, "Gamut," is to explore the full range of classical music, both familiar and obscure.

But there's something else: even though everyone has an idea of what makes up the accepted canon of classical music, each person has a slightly different list.

Case in point: Classic FM is a commercial classical station in the UK that recently put out a Top 40 list based on their listeners' requests. Commercial classical stations (a vanishing breed here in the US), like other commercial radio stations, are concerned about maximizing the audience (and therefore the ad rates they can charge) within their genre. So you can bet Classic FM has stayed with the tried-and-true. Plus, most people aren't classical music geeks. So when asked for names, they're most likely going to offer up the most familiar composers and compositions.

So Classic FM's list should be a pretty good indicator of what Great Music should be, right? Let's look at the top ten:

Two things jumped out at me about this list -- there are four works by English composers, and six of the ten were written in the 20th Century. There's a good chance that were we to poll an American audience, we'd get a substantially different Top 10. Which would be different from the results of a Japanese poll, or a French poll, or a German poll.

Where's Copland on this list? He's at number 165! And Barber's "Adagio for Strings" checks in at number 14.

The point is, while we may think there's a unified canon of Great Classical Works, the actual details are a little more fluid. And that will continue over time. There's a good chance that what an audience 50 years hence will consider masterworks will include some compositions that didn't make this list -- although they've already been written and performed.

The good in music is relative -- and that's the way I like it. Because it gives me the freedom to find those works (sometimes off the beaten path) that speak most deeply to me.
Posted by Ralph Graves at 8:49 AM No comments: Links to this post