Out in Santa Monica, the Los Angeles Chamber Orchestra is hosing a series of musical performances with comments by three neuroscientists who study how music affects the mind.

In the upcoming concert on March 3, 2011, the orchestral will present an all-Schumann program. Dr. Peter Whybrow, director of the Jane and Terry Semel Institute for Neuroscience and Human Behaviour at UCLA and author of several books will be on hand to talk about how Robert Schumann's mental state may have affected his musical output.

There's no doubt that Robert Schumann was a tortured genius. Various diagnosis have been offered for his mental instabilities (which eventually forced him into institutionalized care in his forties). Schumann lived in what's known stylistically as the Romantic period, and his tragic story matched the zeitgeist of the era, as modeled by Gothe's Werther. The artist suffers for his art, and the suffering eventually destroys him (or causes him to take his own life). It is a romantic story -- but hardly one that applies to all composers. Even the geniuses.

In the LA Times article about the series,Scott Timberg writes:

For artists with mood disorders, [Dr. Whybrow] says, three things usually drive their work. “One, the ability to generate intelligence, which is tied to intelligence. Two, a prodigious memory to be able to manipulate those ideas, like keeping a score in your head. Third, mood swings turn things in a novel way. Some artists produce these by taking drugs. But it you have an instability of mood, which Schumann had, you have an acceleration of creativity. You feel an exuberance, which allows you to see things in novel ways.”

No argument here about Schumann. But is that true of all the great composers?

Beethoven had a stormy personality (to say the least), so he had the mood swings, as well as the intelligence and memory, so perhaps yes.

Haydn, on the other hand, was remarkably even-tempered, and could apparently churn out music virtually on demand. And better-than-average music at that! No big mood swings, and certainly no drug use. Hmmm.

Mozart's erratic personality traits have more to do with immaturity, a common problem for former child stars even today. Was that enough to account for his creative genius?

Handel was tempormental , but not especially moody. Ditto with Bach. And both accepted their compositional duties as simply part of their craft. Vivaldi wasn't a drug user, or especially volitile. Same with Gabrieli, Pachelbel, and Palestrina.

Mendelssohn didn't take drugs, and he seemed even-tempered. And what about Brahms?

Wagner may fit the mold, but Vaughan Williams doesn't. And on it goes.

While Schumann may be the symbol of what we imagine the life of a classical composer was (and perhaps should be) like, ultimately the story is just about one man and how he dealt with his creative gifts. One size doesn't fit all when it comes to composing music.

Which is why classical music is so diverse -- just the way we like it here at WTJU.

(I'm sorry I'll have to miss the series, though)
Posted by Ralph Graves at 8:00 AM No comments: 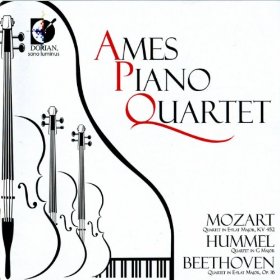 Dorian was always one of my favorite independent classical music labels. And while I was sorry to see them close up shop, I was glad that Sono Luminus bought the assets and revived the label. Dorian was always about not just top-notch performances. They were also concerned about the quality of the recorded sound.

Happy to say, Sono Luminus has been continuing both traditions. The Ames Piano Quartet has been mainstay of the Dorian label for years, and their newest recording of Mozart, Hummel, and Beethoven quartets doesn't disappoint. The sound is somewhat transparent -- it doesn't sound like a studio engineer's fixed anything up. The instruments sound natural, with real presence -- very much as they would in a live performance.

Because the Ames has been together for quite a while, there's a comfortable interplay between the performers as one might expect between old friends getting together. No one's the star here. These are four colleagues coming together for one purpose -- to make great music.

Each work has a different character, and the Ames Piano Quartet each credibly well. Mozart is sufficiently light and airy, but still played in such a way that the work's substance comes through. The Ames tackles the Beethoven quartet differently, ramping up the emotional content as one might expect. The end result is convincing, if a little on the sedate side. This is Beethoven with combed hair and an unruffled collar. That's not to say it's a bad performance at all. In fact, it tends to highlight rather than hide Beethoven's connection to the older classical style of Mozart and Haydn.

Hummel probably comes off the best in this recording. Sandwiched between two giants, Hummel doesn't suffer that much by comparison. It's clear that the quartet devoted as much attention to Hummel's music as they did with Beethoven's and Mozart's. The structure of the work is well-defined, and the phrasing shows off the motives in the best possible light. Definitely an enjoyable listen.

If you look at the flow of all three works, the disc starts with something uplifting and appealing, moves to something comfortable, then finishes with something dramatic -- almost like a very large three-movement work. Having the opening and closing works in the same key further carries the analogy. Surly that was all part of the plan.

If you're familiar with the Ames Piano Quartet, then this a worthy addition to your collection. If not, the Hummel should be worth the price of admission, even if you have the other works.

Definitely recommended.
Posted by Ralph Graves at 7:58 AM No comments:

I've posted before about British composer Sam Watts and his cooperative composition project. Basically, he's looking for 420 different people (who use Twitter) to send in one note for his crowd-sourced composition.

It's been a while since he's posted an update, but as of February 1, 2011, he's received 219 notes. The rules for contributing are pretty straight-forward. As Watts explains in his blog A Composer's Campfire,

I’m asking as many Twitter users as possible to tweet me with a musical note (A-G, naturals, sharps and flats) and these notes will, in the order I receive them, be the melody of the composition.  It will be a three or four movement symphony (depending on how many notes I get).

Tweet me (@i_is_sam) with your choice of note (you can even specify note duration if you like) and include the hashtag #twittercomposition! Only one note per tweeter please! Then please tweet about it to all your followers to get them involved.  That’s it. I’ll do the rest.

You can also just do a search for #twittercomposition to find out more.

So what can you do to move this project forward?

2) If you're one of those people who opened a Twitter account and only tweeted a couple of times before giving up, for goodness sake revisit it and tweet Watts a musical note!


Please RT: Send @i_is_sam a musical note for #twittercomposition
4) If you're not on Twitter, but know someone who is, clue them into the project and ask them to send Watts a musical note.

I've already sent in my note, and sent the word out to all my followers on Twitter to do the same. So the only thing I can do to further help the project along is to do a blog post. Like this one.
Posted by Ralph Graves at 12:58 PM 2 comments: