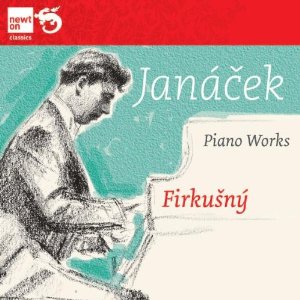 Who better to present a recital of a composer’s music than an artist who studied with him? Rudolf Firkusny began his musical career under the tutalage of Leos Janacek, which gives his intepretation of Janacek’s solo piano works special significance.

All of Janacek’s major works for the instrument are present: Piano Soanta 1.X.1905, On an Overgrown Path, and In the Mists. It’s difficult to say exactly how, but Firkusny’s playing seems imminently suited to these works. Just as Czech orchestra can make Dvorak sparkle in a way that seems elude ensembles from other countries, so to does Janacek’s music benefit from the touch of a sympathetic countryman.

It’s clear that Firkusny understands Janacek’s music and it’s likely he discussed the finer points of interpretation with the composer. The folk-inspired passages sound forthright and simple, while the more complex develop organically. Janacek relied heavily on the cumulative dramatic effect of short phrases and motifs, and Firkusny delivers them with a sure hands. He knows how to draw the connections between the musical thoughts to present a cohesive whole.

With most other performers, Janacek’s music seems to me beautiful, yet static. In these performances Firkusny imbues them with a sense of forward motion that’s leading to an inevitable climax. These recordings were originally released on RCA Red Seal over a decade ago. Newton Classics provides a real service by making them available again. The remastering is flawless, and never gets in the way of the original recordings. 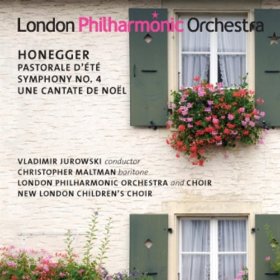 Swiss composer Arthur Honegger is basically known for two things: being a member of “Les Six,” and writing Pacific 2-3-1. This release goes a long way towards changing that shallow impression for the better. Arthur Honegger was a consummate craftsman, writing music that was impressionistic, lyrical, full of rich harmonies, and sounded like no one else.

The album opens with Honegger’s tone poem Pastorale d’ete. Composed on holiday in the Swiss alps, this short work is a wonderful sonic postcard from and makes a great opener for the program.

Symphony No. 4, written just after the end of the Second World War, is an exuberant work. Honegger incorporates two Swiss folk songs into the composition, which provide some of the thematic material Honegger rigorously develops. Although this is a light-hearted work, it’s by no means a light one. While pleasant-sounding on the surface, the structure and depth of the composition reward careful and repeated listening.

Une Cantate de Noel was Honegger’s final completed composition, written while he was terminally ill. Although it features several familiar Christmas carols artfully woven together, this is no treacly songs-of-the-season medley. The opening is somber and restless, reflecting Honegger’s emotional state. As the music progresses, that mood changes, as if the composer is turning from the woes of this world, to the serenity of the next. Une Cantate is a transformative work, moving from darkness to light, returning spiritual depth to well-known (if not shop-warm) carols.

The London Philharmonic Orchestra and Choir do an excellent job, turning in remarkably clean and tight live performances. Conductor Vladimir Jurowski exhibits sure command of this material, and clearly has a deep affinity for Honegger’s music.

If you’re not familiar with Honegger, or – worse yet – only know his one hit, this disc can be a revelation.
Posted by Ralph Graves at 6:50 AM No comments: 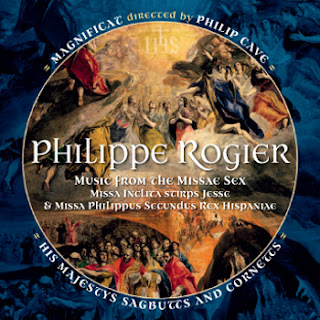 This outstanding recording by Magnificat features a set of masses by Philippe Rogier. Missa Inclita stirps Jesse is a parody mass, one of the higher expressions of a composer’s skill back in the 1500’s.

The idea was to take an opening polyphonic theme from another composer’s work (in this case Jacobus Clemens’ motet Inclita stirps Jesse), and develop the material in a different way. The quoted (or “parodied”) material would begin each part of the mass.

Rogier was from France, but made his fortune in the court of the Spanish king, Philip II. These choral works are very clean, and spare. There’s no mere filling in harmonies here – each vocal line has a purpose. The Missa Inclita stirps Jesse is a fine example of high renaissance counterpoint, with the motifs expanding outward in ever more complex (yet transparent) patterns.

Rogier’s Missa Philippus Secoundus Rex Hispaniae takes its theme from the musical spelling of King Philip’s name. Despite its rather unmusical origin, Rogier makes it the foundation for a mass that’s an amazing compositional tour de force. His Majestys Sagbutts and Cornetts join Magnificat for this work, doubling the vocal lines and shading them in subtle ways. This is indeed music to pull one’s mind to higher things.

Cudos go to Maginifcat, directed by Philip Cave. This early music vocal ensemble has a wonderful blend. The ensemble can be a seamless blend of sound when it needs to be, and clearly articulating multiple lines of counterpoint at other times.

And added bonus is the release of this recording in SACD format. The album is beautifully recorded, but to get the full effect of the performing space (something never far from any renaissance composer’s mind), one should really hear it through the SACD multi-channel format. Rogier’s counterpoint depends on the special relationships between the voices as well as the harmonic – it’s the difference between a 2D and a 3D image.
Posted by Ralph Graves at 7:00 AM No comments: 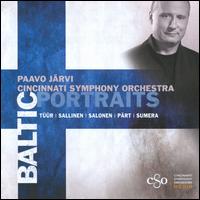 Paavo Jarvi has always been a champion of Eastern European music. In “Baltic Portraits” Jarvi uses that experience to present works of five composers from the region with hearfelt and committed performances.

Erkki-Sven Tuur’s occasional piece Fireflower starts off the program. This exotic-sounding work was written for Jarvi’s tenth anniversary with the CSO, and shows off the orchestra – and its conductor – to good advantage.

Symphony No. 8, “Autumnal Fragments” follows, by Finnish composer Aulis Sallinen. Completed shortly after 9/11, the work’s fragmentary thematic structure reflects somewhat the disruption most of the world felt after the event. This is a powerful composition, and the Cincinnati Symphony is more than equal to the technical challenges presented.

Although best known as a conductor these days, Esa-Pekka Salonen started his musical career as a composer. Gambit is a short work that, although post modern in its harmonies, still retains a certain romantic lushness.

Estonian composer Arvo Part was brought to prominence by his fellow countryman, conductor Neemi Jarvi. One of the works Neemi Jarvi recorded was Part's Cantus in Memorium Benjamin Britten. His son Paavo brings a slightly different interpretation to this now well-known work. The tempos are a little brisker, but this is still a piece that moves at a very slow pace and remains true to Part’s tintinnabulli aesthetic.

Lepo Sumera’s Symphony No. 6 is the second of two major works on the album. The late Sumera admired Mahler, and while one can hear that influence in this symphony, the work seems to owe more to two fellow Estonian composers: Arvo Part and Edvard Tubin. The first movement’s long suspensions echo Part’s tintinnabuli, while the more energetic second movement sounds similar to Tubin’s symphonies.

If you’re familiar with any of these composers, Baltic Portraits will be a treat. If you’re not, Paavo Jarvi and the Cincinnati Symphony Orchestra make a compelling case for further exploration of these composers’ works.
Posted by Ralph Graves at 7:00 AM No comments: