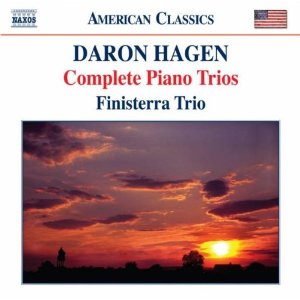 The four piano trios on this release come from two distinct phases of Daron Hagen’s career. The first two, written in 1984 and 1986 respectively, are works by a young composer just finding his way. The first trio, the “Trio Concertante” was written while Hagen was studying with David Diamond, and reflects the older composer’s style (at least to my ears).

“J’etands,” Hagen’s second trio, was inspired by Nadia Boulanger’s final words. Like the first, it leans more towards atonality, but in the longer melodic lines you can hear Hagen’s individuality beginning to emerge. He has the instruments toss ideas and motifs back and forth in a masterful fashion that always keeps the music moving forward.

Fast forward fifteen years to the creation of the third and fourth piano trios.  Both of these works are based on American folk melodies. By this time Hagen’s fully developed as a composer, and uses these tunes in a way that shows he’s comfortable with his abilities and doesn’t need to prove a thing to anyone.

He embraces a more tonal style for these last two trios, without sacrificing originality. In Piano Trio No. 3, “Wayfaring Stranger,” the tune forms basis of second movement played more or less straight. In the other movements, different aspects of the melody chopped up and rearranged. The tune makes a reappearance at the end of the fourth movement (Aubade and Variations), tying the entire composition together.

The final trio, “Angel Band” uses the Appalachian gospel song as a starting point. As with the third trio, the tune is reduced to its primary musical elements, which are then used to create new sonic structures. While the listener never gets a straight-forward statement of the original melody (save at the conclusion of the work), it clearly drives the structure and direction of the piece.

If you’re looking for something a little more substantial than Americana tricked out in classical garb, I can highly recommend this disc. All four trios are solidly constructed, and have enough depth to reward repeated listening.
Posted by Ralph Graves at 7:21 AM No comments: Links to this post 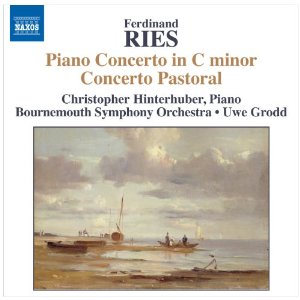 Ferdinand Ries is best remembered today (if at all) as Beethoven's personal assistant. Although he served that role well - securing performances, publication deals and more - that wasn't originally why their paths crossed. Ries came to Beethoven in 1803 to study composition. Like his mentor, Ries was a piano virtuoso as well as a composer. His piano concertos were written primarily for his own use, to provide material he could use in performance - a standard practice of the day for any touring virtuoso.

Naxos has released four volumes of Ries' concerti, the most recent featuring two of these works plus a shorter fantasia for piano and orchestra. So what does Ries' music sound like? Sort of like a kinder, gentler Beethoven. His works have the same general structure, with some of the same harmonic turns that Beethoven favored. You'll also hear big orchestral chords hammering away at important cadence points. But there the similarities end.

Ries is more concerned with tuneful melodies than delivering pronouncements from on high. His motifs are light and appealing. While the solo piano part is challenging technically, it's more about taking the listener along on a thrilling melodic journey rather than fully exploring the potential of either the instrument or the motifs.

Stylistically, Ferdinand Ries straddles the late classical and early romantic era. The Introduction et Rondeau Brillant Wo54 which appears on this release, is a good illustration of that. While not entirely free of Beethoven's influence, Ries' work seems more Schubertian in its free-form development.

Pianist Christopher Hinterhuber turns in a top-notch performance on this recording (as does Uwe Grodd and the Bournemouth Symphony Orchestra). His playing is light and fluid -- perfectly suited to this material -- yet it has power when it needs to. Hinterhuber really makes the cadenzas sparkle, and gives the impression that Ries' music is actually fun to play.

An appealing collection of works for piano and orchestra!
Posted by Ralph Graves at 7:33 AM No comments: Links to this post 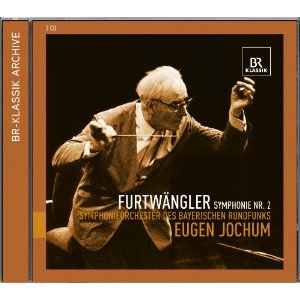 Some music is so durably constructed that it can withstand the poorest performance. If a badly-lead ensemble provided your first exposure to Beethoven’s 5th Symphony, I think you’d still be able to determine that the failings were with the musicians and not the score.

But some music requires a little extra love to make it shine. That’s the case with Wilhelm Furtwangler’s 2nd Symphony. Furtwangler -- like Mahler -- was highly regarded as a conductor, but always thought of himself first as a composer. Like Mahler, his works were largely ignored during his lifetime, but that’s where the resemblance ends. Unlike Mahler, Furtwangler’s music has  never really caught on.

For a long time I believed it was completely the fault of the music. Furtwangler thought big – perhaps too big. His orchestral works are massive, and even his chamber pieces tend to push the one-hour mark. Plus, Furtwangler used Bruckner’s technique of gradually building to a dramatic climax, stopping, and then doing it again, giving me the impression that the work never really got off the ground.

In some of the recordings I’ve heard, the orchestra was clearly doing little more than sight-reading, and the conductor seemed to be just trying to get through the thing. As a result, the music never really engaged me. This new release with Eugen Jochum conducting the Bavarian Radio Symphony Orchestra in a live 1954 performance of Furtwangler’s 2nd Symphony is another matter entirely.

Jochum was a close friend of Furtwangler, and took the time necessary to really get to know the score. The aging Furtwangler had been invited by Jochum to attend the performance, and he sat in on the orchestra’s rehearsals. But Furtwangler died nine days before the concert, and the work was then performed instead as part of a memorial concert.

Jochum (probably aided by Furtwangler’s input) had the big picture, and it shows. Rather than hearing a symphony that started and stopped, with Jochum I senses that the music was actually going somewhere. Although Furtwangler’s melodies still don’t fully stick with me, I was astonished at some of the quite beautiful passages (particularly in the fourth movement) that grew organically out of the material. Jochum knew exactly what to highlight and what to move to the background to make sense of this work.

Is Furtwangler’s 2nd Symphony a great composition? No. But the sympathetic and skillful conducting of Eugen Jochum makes the case that it is a very good work. And one that I thoroughly enjoyed listening to.
Posted by Ralph Graves at 7:30 AM No comments: Links to this post

Gisela!: The Strange and Memorable Ways of Happiness, a musical theater piece by Hans Werner Henze, Christian Lehnert, and Michael Kerstan, was given its premiere on November 20, 2010, at the Semperoper in Dresden. The work was commissioned by the Ruhrtriennale and the Sächsische Staatsoper Dresden. It is a peculiar work. The central character Gisela meets her true love Gennaro in Naples and is willing to renounce her German fiancé for him, if her new "Italian lover" is only willing to appreciate the beauties of Oberhausen in Germany's former industrial heartland, now a cultural center, the Ruhrgebiet. In the end Gisela finds true love after passing through numerous stages of fantasy, ecstasy, and sometimes violent confrontation. The work is barely 90 minutes in length, so its various themes are hardly developed. Still, the music is both approachable and, at times, charming.

Like much of contemporary opera, the staging was a mix of the literal and fantastical. The opening is set in the terminal of a modern European airport, but the interaction between Gisela and Gennaro is viewed as a film projection at the back of the stage. At various points dancers appear, and Gennaro is a member of a commedia dell'arte troupe. There is no discernable dramatic narrative. Instead, the opera is a collage of sometimes vivid images and impressions, augmented by the musical score. At times Henze quotes the music of Bach and others, but the musical language is predominantly that of contemporary neo-tonality. Henze uses percussion effectively as a musical motif.

The title character Gisela was sung by Nadja Mchantaf, Gennaro by Giorgio Berrugi, and
Hanspeter by Markus Butter. The State Opera Choir and Staatskapelle Dresden were vividly conducted by Erik Nielsen. Mchantaf, a native of Schleswig-Holstein in Germany, was especially effective dramatically, musically, and visually. Gisela, if for no reason other than its brevity, is unlikely to enter the standard repertoire by itself, although paired with Henze's earlier opera, L'Upupa, acclaimed at its premiere at the Salzburg Festival in 2003, it might provide an enjoyable evening's entertainment.
Posted by WTJU Opera at 3:33 PM No comments: Links to this post 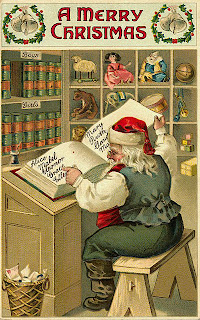 It's that time of year again, when many people break out the Advent calendars and count down the days until Christmas (we won't say whether it's with anticipation or dread). One of my favorite versions is the musical Advent calendar posted on the Omniscient Mussel's website.

"Miss Mussel" is free-lance classical music writer Marcia Adair, and each day during advent she picks a different classical (mostly) performance and work. (Extra points if you know what opera the Omniscient Mussel appears in)

Rather than opening a tab on a paper calendar, you just click the "play" button and enjoy. The selections have always ranged from the familiar to the obscure, and I look forward to seeing -- and listening to -- each day's post.

This year the calendar duties have been taken over by "Frere Mussel," a professional singer living in Germany. The selections are different, but still top-notch.

If you're looking for something more than the same old same old musically, I highly recommend the Omniscient Mussel's Advent Calendar.
Posted by Ralph Graves at 8:01 AM No comments: Links to this post