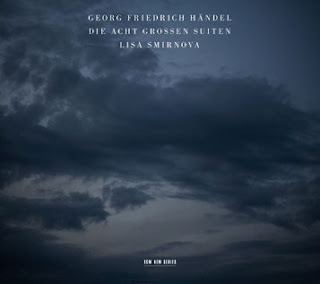 As far as I am concerned, the never-ending debate on the appropriateness of playing Baroque keyboard music on harpsichord or piano falls on deaf ears. The embellishment that the modern piano brings to Baroque music adds greatly to its enjoyment.

Throughout the years, a host of pianists such as Glenn Gould, Andras Schiff, Angela Hewitt, and Murray Perahia among others has contributed a rich collection of keyboard transcriptions of Bach, Handel, Scarlatti, and many other Baroque masters.

The eight keyboard suites (HWV 426-433) of Georg Frederich Handel have often been recorded on piano, but perhaps never better than on a new ECM recording by Russian-born pianist Lisa Smirnova. Smirnova, a longtime resident of Vienna, spent several years studying the suites before recording them this year.

Handel published the suites in 1720, because “Surrepticious and incorrect Copies of them had got Abroad.” Their beauty and energy have delighted audiences ever since. As Smirnova notes in the accompanying CD literature, Handel made full use of Italian, German, and French influences that he absorbed so flawlessly. And as with any of Handel’s instrumental music, the listener is rewarded with oratorical whispers just beneath the surface.

I would like to believe that the Russian heritage of Lisa Smirnova is partly responsible for both the technical brilliance of her playing but also her passion and energy. Much as Angela Hewitt has done recently with Bach’s Well-Tempered Clavier, Smirnova offers a complete body of work that is impossible to resist. I can predict that the keyboard suites of GF Handel played by Lisa Smirnova will soon be heard on WTJU.