Kraus Viola Concertos are No Joke 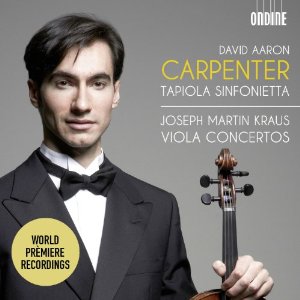 David Aaron Carpenter presents three standout viola concertos on his new Ondine release. These concertos by Joseph Martin Kraus, dating from the 1790s, were thought to be lost until fairly recently. Kraus, who spent most of his professional life in the Swedish court, was well-regarded by many musicians of his day, including Haydn (for whom Kraus wrote a symphony).

Kraus was also an outstanding violist, which makes these works doubly appealing. First, they’re in the clear, classical style of Mozart and Haydn. Second, they really test the limits of the instrument. Kraus knew what a viola was capable of, and he wrote his solo parts accordingly.

Kraus has been called the “Swedish Mozart,” and with good reason. He had the same ability to spin out perfectly balanced melodic phrases that sound simultaneously simple and original. Like Mozart and Haydn, Kraus kept with the standard orchestra of the time – a large string ensemble with flutes and clarinets for coloration.

Violist David Carpenter keeps things moving along, which is good. This is music that benefits for a lightness of touch, and the sprightly playing of the Tapiola Sinfonietta hits just the right emotional tone.

The most interesting work is the Concerto in G major for Viola, Cello, and Orchestra. Although it seems to be a double concerto, the soloists aren’t quite equal partners. The orchestra supports the cello which in turn supports the viola. Still, it’s an engaging work and definitely one worth hearing.

Joseph Martin Kraus is lamentably under-represented in classical recordings. This release should go a long way towards redressing that situation. Highly recommended.
Posted by Ralph Graves at 7:11 AM No comments:

Wednesday, 30 May 2012, marks the 50th anniversary of the first performance of Benjamin Britten’s War Requiem at the newly built Coventry Cathedral. The cathedral was built adjacent to the ruins of the Gothic cathedral, which was devastated during the bombing of the City of Coventry by the Luftwaffe the night of 14 November 1940. The decision was immediately announced the next morning to rebuild the cathedral. The new cathedral was consecrated on 25 May 1962, and the War Requiem, commissioned for the occasion, was premiered there on 30 May 1962.
The War Requiem combines the Latin text of the Requiem mass with the searing poetry of Wilfred Owen, who was killed in the trenches in WWI only days before the cease fire. This monumental work has not lost any of its power or intensity today.

Britten was a pacifist, and his world view of peace and reconciliation was reflected in his selection of the soloists for the performance from among three of the major nations in conflict in both world wars: Peter Pears (English), Dietrich Fischer-Dieskau (German), and Galina Vishnevskaya (Russian). The Soviets, however, refused permission for Vishnevskaya to appear. With less than two weeks before the premier, Britten was without a soprano (despite having the programs printed up with Vishnevskaya’s name in it). Britten turned to Heather Harper, who, with perfect pitch, was known for her ability to learn a part very quickly.

Benjamin Britten made a recording of the War Requiem in 1963, featuring Pears, Fischer-Dieskau, and Vishnevskaya, the soloist originally intended for the part. This Decca recording is now legendary, and it sold 200,000 copies in the first 12 months. Not surprisingly, it remains the definitive interpretation of this powerful work.

Heather Harper, however, made the War Requiem her own, singing it hundreds of times in performances. (According to the BBC Music Magazine, her last performance of it was in 1995.) She is featured on a superb 1991 Chandos recording of the War Requiem conducted by Richard Hickox, and her performance is impeccable. (The recording was a 1992 Gramophone award winner.)

To mark this occasion (and the recent death of Dietrich Fischer-Dieskau), I will be playing a complete recording of the War Requiem on Classical Sunrise on WTJU Charlottesville, 91.1 FM, or wtju.net, on Sunday 27 May 2012, between 6 and 9 AM EDT.


Posted by Deborah Murray at 8:39 PM No comments: 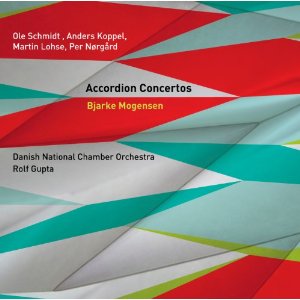 Mention the accordion, and most people think of Weird Al Yankovic, or a polka band. What they won’t think of is an instrument capable of serious artistic expression. And certainly not one that belongs in the classical world.

Bjarke Mogensen is out to change that perception with this new recording, Accordion Concertos. In it, he performs four concertos. All have been written within the last half century, and two specifically for Mogensen.

Ole Schmidt's Symphonic Fantasy and Allegro starts off the program. It's a fairly traditional-sounding work, with the soloist and ensemble having clearly defined roles. Rich harmonies support the fluid melodies, which make this work an appealing one to listen to. Although most of the solo work on this recording is single line, Schmidt writes some interesting counterpoint into the cadenzas.

Anders Koppel composed the Concerto Piccolo for Mogensen, and the concerto shows the artist’s ability to best advantage. The work is an angular neo-classical composition  that’s well suited to the tonal qualities of the accordion. In my opinion, it's the strongest work on the album.

In Liquid, another commission by Mogensen, is radically different. Martin Lohse's work is almost a study in slow motion. Lohse draws out every single note both from the ensemble and the soloist. The sensation is similar to trying to run underwater. And the enforced slowness of the composition makes the listener pay closer attention to the music as it passes by. An effective work, and one that completely removes the accordion from its popular roots.

As its name suggests, Recall by Per Norgard, harkens back to the roots of the instrument. While at times it threatens to devolve into sea chanty, at heart it’s a carefully composed showpiece full of energy and good spirits.

These are fresh, exciting works that succeed both presenting the accordion in a new way and being an enjoyable listening experience. Whether you’re after fresh sounds, virtuoso performances, or just plain good music-making, this recording fills the bill. 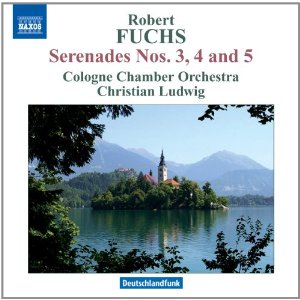 Naxos completes its survey of Fuchs' Serenades with this release (the first two were released last year with the same performers). It's a collection well worth owning.

Robert Fuchs is perhaps best remembered as a composition teacher. His impressive list of pupils include Gustav Mahler, Hugo Wolf, Erich Korngold, Jean Sibelius and other major composer who defined the post-romantic scene of the early 20th Century. During his lifetime, though, he was also highly regarded as a composer. These works attest to his skill.

By definition, a serenade is a fairly light work, and all three of these compositions have that spirit. They're short, amiable compositions that present their attractive melodies in a straight-forward manner. That's not to say they're simple works. Fuchs uses a rich harmonic language that provides subtle emotional inflections. Chromatic relationships help the music glide smoothly from one idea to the other, all the while sounding like an organic whole.

To my ears, the serenades reminded me somewhat of Elgar's Serenade for Strings, which was written around the same time. The Cologne Chamber Orchestra, under the direction of Christian Ludwig plays with a light touch, which brings these serenades to life. Brahms liked Fuchs' music very much. I did, too.
Posted by Ralph Graves at 7:26 AM No comments:

Weinberg: Symphony No. 6 - A Russian composer is given his due 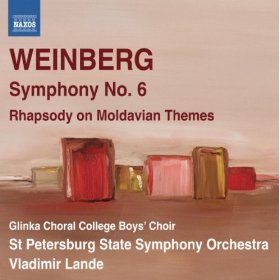 Mieczyslaw Weinberg was a close personal friend as well as a colleague of Shostakovitch, and that relationship shows in his music. His Sixth Symphony opens in a manner that sounds (to my ears) very much like Shostakovitch. But while there are some stylistic similarities, there are also plenty of differences.

Weinberg was an imaginative orchestrator, particularly with his use of brass instruments. This programmatic work has a powerful message. The symphony begins with a celebration of the care-free days of youth, and moves through the horrors of war (and the death of childhood) to a tentative hope for the future. Weinberg's sparing use of a boys' choir makes the message all the more effective.

The second work on the disc is a shorter Rhapsody on Moldavian Themes. The rich melodic content of this composition makes it instantly attractive. Weinberg sounds less like Shostakovitch here (perhaps its the choice of subject matter). The music flows along in a relentless fashion, with plenty of energy and high-spirited dance motifs that almost beg to be choreographed.

Vladimir Lande leads the St. Petersburg State Symphony Orchestra in the performance of these works. The playing is first-rate, which really helps further the cause for these relatively unknown compositions. If you aren't familiar with Mieczyslaw Weinberg, this release is a good place to start.
Posted by Ralph Graves at 6:59 AM 2 comments: