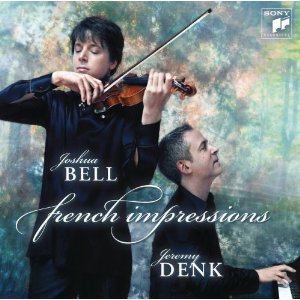 Good chamber music is a conversation – and French Impressions is just that. A conversation between two old friends enjoying themselves. It’s no accident that both violinist Joshua Bell and pianist Jeremy Denk get equal billing. In the three works presented both artists contribute equally to the performance.

The album beings with Camille Saint-Saens' Sonata No. 1 for Violin and Piano, completed in 1885. It's the  most formally constructed of the three works on the CD, but there’s nothing stuffy about it. Bell and Denk play the work with a light touch and real animation. They also don’t mind slightly lingering over the beautiful harmonies, calling the listener’s attention to the sumptuous sound.

Speaking of sumptuous, the Cesar Franck Sonata for Violin and Piano in A major is even more so. Bell and Denk make a compelling case for this often-recorded work, and provide a fresh take on this familiar music.

Maurice Ravel incorporated some American blues into his 1922 Sonata for Violin and Piano. Many performers approach the movement from a classical tradition, and downplay the music’s inspiration. Not so Bell and Denk. They relish the jazz elements, and play them with such elan that the movement positively swings.

Although stylistically diverse, the three sonatas make a cohesive and interesting program thanks to Bell and Denk. It’s difficult to put into words, but they bring out the inherent Frenchness of these compositions.

I never really thought much about these sonatas before. I mean, they were OK, but not especially engaging personally. Joshua Bell and Jeremy Denk have changed my mind, giving me a new appreciation for these compositions.That's impressive.
Posted by Ralph Graves at 6:51 AM