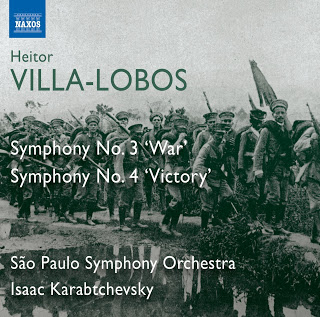 This is the second installment of Villa-Lobos symphonic cycle by Karabtchevsky and the Sao Paulo Symphony Orchestra. The two symphonies on this release are the surviving parts of a triptych commissioned by the Brazilian government to celebrate the end of the First World War. Symphony No. 3 "War," and Symphony No. 4 "Victory" are on this release. Symphony No. 5 "Peace" is lost.

Completed in 1919, these symphonies play against expectations. First, the works have very little of the folk elements Villa-Lobos scores are known for. Second, although commemorating victory, the symphonies avoid bombastic and heroic gestures. And the results are two compelling and attractive works that deserve a wide audience.

Symphony No. 3 "War" has some bugle calls and an excerpt from La Marseillaise. The latter references the French battlefields where Brazilian troop fought and died. But beyond these elements there's nothing overly militaristic about the work. Instead, Villa-Lobos has written a very somber and understated symphony that captures the mood of a nation that discovered there's nothing glorious about war in the trenches. The programmatic names of the four movements frame the story the music effectively conveys; Life and Labour, Intrigues and Rumors, Suffering, and The Battle.

Symphony No. 4 "Victory" is a big, expansive work that isn't as dark as the third symphony. But this isn't a celebration as much as a reflection on the cost of victory. Villa-Lobos uses the resources of his enlarged orchestra effectively, creating broad thematic gestures that slowly unfold. Symphony No. 4 is more elegiac than triumphant.

The Sao Paulo Symphony Orchestra is well-recorded, and under Isaac Karabtchevsky's direction delivers sympathetic and committed performances. I look forward to the next installment of this cycle.
Posted by Ralph Graves at 6:12 AM