The Strange Case of the Schubert Symphonies 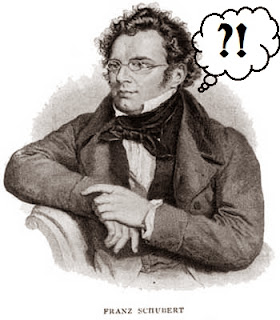 What's odd?
1) There's a symphony missing.
2) It's not the unfinished symphony.

Unfinished, but included
The official "Unfinished" symphony (No. 8) incompletion wasn't because of Schubert's death. He wrote the first and second movement in 1822 (six years before his death), and just never got around to writing the last two movements. (most symphonies from this era had four movements). The first two movements were of such quality, though, that they were performed and have become part of the standard repertoire.

Unfinished and missing
The missing symphony is No. 7 is even more of a fragment than the 8th. composed in 1821, this E major symphony exists in sketch form, with a melody line and bass and counterpoint underneath. Unlike the 8th, all four movements of the 7th were written, and the first part of the first movement is fully orchestrated (the next step in the composition process).

The other other unfinished symphony
And there's another symphony missing from the list. In the final weeks of his life, Schubert composed a 10th symphony in a piano reduction score. That is, the music is written to be played on the piano, with notes indicating instruments for later orchestration. Like the 7th, it appears to be complete in sketch form.

With a significant amount of these compositions complete, it isn't surprising that musicians have been tempted to fill in the blanks.

Symphony No. 7's three co-composers
Schubert's 7th symphony was first completed in 1881 by John Francis Barnett, an English composer and teacher. Famed conductor Felix Weingartner did his own version in 1934, and featured it in performance. The final version (to date) is by composer and scholar Brian Newbould, who extensively studied Schubert in order to make his completion as authentic as possible.

Symphony No. 10's two-and-a-half co-composers
The score for Symphony No. 10 was only identified as such in the 1970's, and Brian Newbould offered a scholarly completion of it. Conductor Pierre Bartholomeé revised Newbould's version with controversial results. And finally, composer Luciano Berio used the source material  as the basis for his work "Rendering."

But are these completions valid? It's difficult to say Schubert may have revised the surviving material after working with it for a while. While we can say a combination of instruments for a certain passage is likely, based on Schubert's other works, it's possible he may have chosen differently.

Personally, I think the sketches are complete enough that most of the resulting music is Schubert's. And I'm glad for the opportunity to hear these works, even in an adulterated form. They deepen my understanding and appreciation of this short-lived musical genius.
Posted by Ralph Graves at 8:07 AM