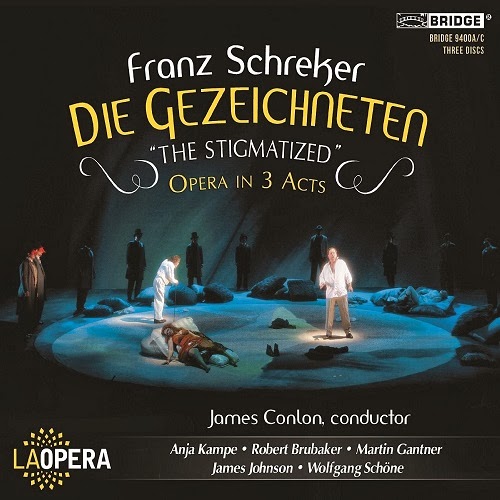 Schreker's shimmering, richly orchestrated score is indeed beautiful, while simultaneously conveying a sense of unease and overripe decadence. This live recording of "Die Gezeichneten" by the LA Opera captures the spirit of Schrecker's troubling work and delivers its emotional content in full.
Maestro James Conlon has a clear affinity with this music, and it shows. Schreker scored the work for an expanded orchestra. The LA Opera had to reduce the size of the ensemble to fit in the venue, but no matter. Under Conlon's direction, the music sounds rich and full. If anything, the paring down of the orchestra adds a limpid translucence to the score.

Robert Brubaker performs well as Salviago, also his upper register is a little thin at times. Anja Kampe, as Carlotta,  sings with a soft, rounded tone that sounds especially beautiful in the lower register. Their voices have a wonderful blend, making the duets between Salviago and Carlotta the high points of the recording (at least for me).

This three-CD set includes a booklet with the complete libretto in German, Italian, French, and English. Bridge's release captures the excitement and energy of the live performance with pristine sound (and virtually no distracting audience noise). Recommended.
Posted by Ralph Graves at 8:58 AM