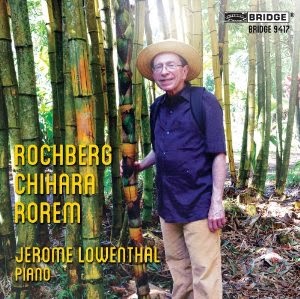 Pianist Jerome Lowenthal presents an attractive program of works that he has some kind of direct connection to. And that connection makes these not just informed, but exciting and insightful performances.

George Rochberg's compositions make up the bulk of the release, with three works that are similar in construction, yet yield different results. "Carnival Music" (composed for Lowenthal) is a wild mix of academic atonality and commonplace blues, tangos, and marches -- filtered through a fun-house mirror. "Nach Bach" a work Lowenthal champions, is more aggressively atonal, with snatches of Bach interspersed, like sunshine glimpsed through roiling clouds.

"The Partita Variations" features a number of pastiches (again, mixed with atonal elements) that culminate in a decidedly tonal three-part fugue.

Lowenthal easily sails through the sudden shifts in style -- one moment playing heart-on-your-sleeve Tchaikovsky, the next icily stabbing disjunct notes across the keyboard.

Paul Chihara's work, "Twice Seven Haiku for Piano," is the result of a suggestion made by Lowenthal to the composer. It's a set of quite short characteristic pieces that cover a wide range of styles and genres. These are fun little musical vignettes that Lowenthal plays with relish. The album concludes with Ned Rorem's "75 Notes for Jerry," written for Lowenthal's 75th birthday. Lowenthal's tender performance makes the work sound very close to Debussy, a fitting end to this post-modern program.