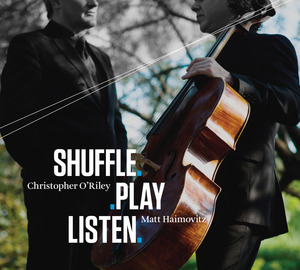 This is an album of arrangements and transcriptions. I know that might sound sort of "dirty" to some in the classical music world, but consider that even the "purest" and most un-tampered-with works on this album, the Pohádka (Fairy Tale) by Czech composer Leoš Janáček and the Suite italienne by Igor Stravinsky are themselves excerpted from larger works by their composers, and in the case of Stravinsky, sanctioned for arrangement by the much-praised cellist Gregor Piatigorsky.

This album is subtitled "a collaboration that blurs the boundaries between classical and pop." I'm not sure it does that in the way it portends. We're not suddenly whisked to Le Poisson Rouge or the Knitting Factory. Cellist Matt Haimovitz has spent the last decade bringing classical music to unlikely venues. Pianist Christopher O'Riley has broken the fourth wall of radio through his arts education/variety show, From the Top, and his arrangements of Radiohead songs for piano earned him four out of five stars from Rolling Stone magazine. This type of hybrid program fits into the vision of the classical future by music writers Alex Ross and Greg Sandow.

This is, in some ways, a very traditional live chamber music album; in fact, it succeeds better than most live albums of any genre. It captures all of the individualistic quirks of chamber music performance -- the burnished weight of the bow on the cello strings, the staccato (and even lighter) touches of the pianist's fingers, and most importantly, the blend of the instruments in a hall with just the right amount of ring. It does not seem to be recorded before a live audience -- which is not a bad thing. The album was recorded in the cavernous Multimedia Room of the Schulich School of Music at McGill University in Montreal.

The twentieth century is well-represented on the first disc, with works by Leoš Janáček (Pohádka [Fairy Tale]), Bohuslav Martinù (Variations on a Slovak Folksong), Igor Stravinsky (Suite italienne (after Pulcinella)), and O'Riley's own arrangement of Bernard Hermann's music cues from the 1958 film Vertigo. The five movements of this last suite are spread out between the other pieces of the disc, giving a shuffle feeling to the disc, even if one were not consciously shuffling their digital music player to the next selection.

The Janáček is given a upbeat and bright reading which brings out the love and anguish expressed in the original incidental music he wrote for Julius Zeyer's dramatic tale, Raduzand Mahulena, in 1899. Haimovitz's use of line and touch are also evident in the Martinù and the Stravinsky (which is alternately playful and detached as required--this is Stravinsky's neoclassic period, after all).

It is the Hermann where both have a great deal of fun in outlining the characters and the action--and it is all in the touch of Haimovitz's bow whether it is burnishing the strings or singing in a wisp-like fashion on the upper strings. (His use of harmonics are also outstanding). Once again, I can't think of a disc I've heard in recent memory where the the recording location has helped the performers sound so good. (Please don't let this be some tomfoolery of the post-production process!)

If you're familiar with some of the songs on the second disc, you are going to know that they have left their native environment. They lose the drum beats, the electric guitars, and the voices of their original incarnations. Arcade Fire's Empty Room keeps the frenetic strings (provided by Haimovitz at the outset), but he soon becomes the lead singer, crooning over O'Riley's fast fingers--in a style akin to Philip Glass's music, but also very close to the accompaniment of Stravinsky's Suite italienne.

with the original by Arcade Fire:

Haimovitz twangs and colors each of the songs on this disc in a distinct way which sometimes mirror the original, and at other times is completely different. O'Riley shines more in the Radiohead arrangements, such as Pyramid Song and Weird Fishes/Arpeggi. If not all of these pieces capture the spirit of the originals, then it should be noted that there are some very pretty melodies that are being re-worked effectively for a classical audience.

Transposing the Mahavishnu Project's Dance of Maya by John McLaughlin on cello, though, eliminates the weirdness of the electric version, and we are left with music which sounds like Martinù. It swings later when O'Riley enters, and Haimovitz's energy amps up when he's using his portamento (sliding between notes) to create a distorting haze over the proceedings. I don't know if this is effective, but it certainly is well-played and thought-provoking.

McLaughlin's Lotus on Irish Streams in this form, alternates between Debussy and George Winston for me. Other treatments of Blonde Redhead (Misery is a Butterfly), the Cocteau Twins (Heaven or Las Vegas) and Radiohead alternate between intense, laid-back, and melodic. The selections on this second disc (arranged for the most part by O'Riley) have been well-chosen to blend with the first one.

Listening to these discs in the car on shuffle mode, they transitioned quite well, but they could also be programmed in a more conscious fashion. One could enjoy Shuffle.Play.Listen as a well-curated (and superbly executed) recital of different genres of music being incorporated into a concert hall experience. Or you could just sit back and shuffle through a bunch of good tunes. I recommend lowering the lights and taking it all in on the best audio equipment you own.
Posted by Thom Pease at 1:22 PM