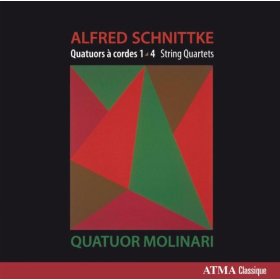 This two-CD set presents all four of Alferd Schnittke’s string quartets. The first was composed in 1966, and the remaining three over a relatively brief span in the 1980’s.

The first quartet is very tonal and contrapuntal. There’s a lyricism I find very appealing in the music, perhaps even a neo-romantic undercurrent.

It would be fourteen years later that Schnittke would return to the genre, and the second quartet attests to the changes in the composer’s style. This is a more aggressively modernist work, and I heard traces of minimalist drive coupled with the angularity of Stravinsky mixed together in an exciting fashion. (Speaking of which, also included the Canon in Memoriam Igor Stranvinsky, a short work that shows Schnittke’s deep respect and understanding of Stravinsky’s music.)

The third quartet, written just three years after the second, sounds radically different. It opens with lush modal harmonies that set the stage. As the work develops, it becomes increasingly dissonant, but never very much so. Of the four quartets, this is Schnittke’s most neo-classical work, which makes it the most accessible as well. No wonder the Quartuor Molinari chose to start the program with it!

By contrast, Schnittke’s final quartet is a much sparser work. It seems very pointilistic – often only one instrument is playing at a time. This elegiac quartet gradually building in intensity, leading to a powerful finish that seems sum up not just the composition itself, but Schnittke’s thoughts on the genre as a whole.

The Quator Molinari specializes in contemporary repertoire, and is perfectly at home with these works. As with all good chamber music, there are conversations going on between the instruments that help bring cohesion to Schnittke’s music. These were recordings I found myself returning to several times. Highly recommended.
Posted by Ralph Graves at 7:16 AM