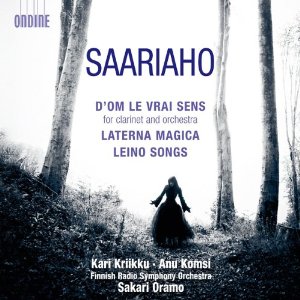 This is an album of challenging music. But if you’re up to that challenge, you’ll find your listening experience deeply rewarding. Kaija Saariaho is concerned with the nature of sound, and the major work on this release, her clarinet concerto, shows it.

The work was written in consultation with clarinetist Kari Krikku, and really pushes the limits of the instrument. Krikku plays in the extreme high and low ranges of the clarinet, and even uses multiphonics in a sections. But it’s not just to show off his extraordinary skill -– there’s an artistic reason behind it all.

The concerto is a journey through the senses, as depicted in a series of medieval tapestries. with a movement each devoted to hearing, sight, smell, touch, taste, and finally, the “sixth sense” titled “to my only desire.” That final movement pulls the disparate parts of the work together in a transfiguring fashion that (as you can tell) is very difficult to describe.

Also included in this album is the short work Laterna Magica. It draws inspiration from the early form of slide projector, called the magic lantern. Vague clouds of sound emulate soft-focus images cast on walls, moving, combining –- and sometimes interacting in a work that’s both ethereal and deeply moving.

Leino Songs is a set of orchestral songs, based on the writings of Eino Leino, one of Finland’s greatest poets. Saariaho looks to the inherent drama of the text to shape the musical structure, as instruments clash and withdraw. Tying the composition together is the soprano voice. Solosit Anu Komsi worked with Saariaho on this composition, so the music lays very well for her.

Saariaho doesn’t write pretty music – but she does write vital music. You might not be able to whistle the themes, but the raw emotion Saariaho lays down on manuscript paper is powerful indeed. This is the music of contemplation and thought, and reaps additional insights with repeated listening.
Posted by Ralph Graves at 4:42 AM