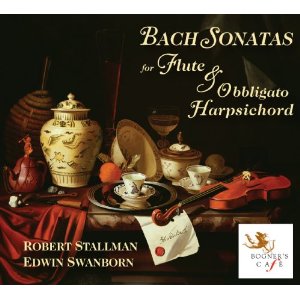 The subtitle of this release aptly describes the disc. In 1730's J.S. Bach spend a significant amount of time at Zimmermann's Coffeehouse in Leipzig. It was one of the regular performing venues for the Collegium Musicum, which he directed (and wrote music for). Most of his instrumental music of this period were written for this group, including the four flute sonatas in this release. By no means are these major works. Of course, it is Bach, so the sonatas are well-crafted, but the music is intentionally light and simple. This is more the Bach of "Air on G String" than the Bach of the Cello Sonatas.

Robert Stallman performs on a modern flute, but that just gives the works additional charm. The music mostly stays in the lower part of the flute's register, and Stallman produces a very warm sound on his instrument. The result is some attractive playing and a pleasant listening experience overall. Edwin Swanborn provides tasteful accompaniment on the harpsichord. The keyboard obbligato helps move the music along without sounding overly busy or fussy. An attractive program of music played with just the right tone to keep the proceedings light and entertaining -- as perhaps they were in Zimmermann's over three centuries before.
Posted by Ralph Graves at 7:29 AM