Nine Notes That Shook the World 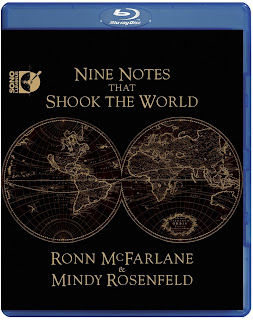 Is it OK to call a classical release a "feel-good recording?" Because to my ears, that's what Nine Notes That Shook the World is.

Lutenist Ronn McFarlane and flutist Mindy Rosenfeld have been playing together for over thirty years in various groups (mostly the Baltimore Consort), and are more than comfortable with each other's style. Plus, this release features some of their favorite early music works. The performances have a natural easiness to them that I find quite relaxing.

Not that this is background music by any means. McFarlane and Rosenfeld present a first-rate program of renaissance and baroque music that draws the listener in. While one might be used to hearing "My Lady Carey's Dompe" performed as an early music duet, arranging Handel and Bach for recorder and lute gives those works a fresh sound.

And McFarlane and Rosenfeld vary their instruements from piece to piece, sublty matching texture and timbre to the character of each work. In the end, though, it's the chemistry between the performers that makes this such an appealing release. Two old friends playing the music they love best -- what could be better?

Sono Luminus sweetens the pot by including two versions of the release; CD, and Blu-ray audio. If you've got the equipment, stick with the Blu-ray disc. The full, natural sound makes these soft-spoken instruments come alive.
Posted by Ralph Graves at 6:00 AM