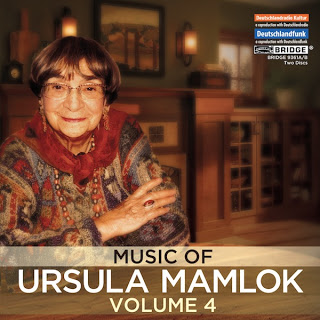 Bridge Record's survey of Ursula Mamlok's music continues with a collection of works from all phases of Mamlok's career.

Although most noted for her serial works, Mamlock began as a neoclassical composer (albeit one that strained at the limits of tonality). "Grasshoppers" (1957) and Sonatina for 2 Clarinets (1958) show her affinity for counterpoint, even in a somewhat traditional melodic framework.

One can hear her move towards Schoenberg serialism with "Four German Songs" (1958) and fully embracing it with the Composition for Cello (1962). To my ears, the works of this period sound like notes hanging from an Alexander Calder mobile. Tone clusters and motifs align and move apart according to their prescribed paths, yet still yield unexpected and seemingly random combinations.

Most of the works with percussion on this release come from the 1970's when Mamlok was exploring the tactile aspect of music. Works like the "Variations and And Interludes for Four Percussionists" (1971) can sound like Varese at times, but the resemblance is passing.

For me, the most successful works in the collection are the most recent -- "Aphorism I and II" (2009) and "Rotations" for cello and piano (2011). Mamlok's grown into her own compositional style, synthesizing all the influences apparent in the different phases of her earlier career. The music sounds completely natural, while still conforming to its own internal logic.

Bridge doesn't order the works on this 2 CD set in chronological order, which helps the listener hear the connections between works that are sometimes decades apart. Well done.
Posted by Ralph Graves at 5:38 AM