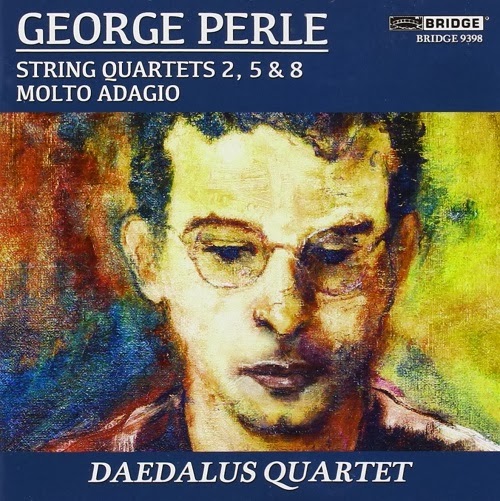 George Perle created what he called "twelve-tone tonality," and the works on this release are all prime examples.

The earliest quartet on the album, Perle's second, also sounds the most tonal -- but that's a relative statement. Even though this is technically written in the key of D minor, the tonal center shifts about quite a bit. All in all, though, a carefully constructed work that moves along to its own internal harmonic logic.

The String Quartet No. 5 seems to continual shift back and forth between tonality and atonality. The underlying serial organization takes the work is somewhat unexpected directions. But its overall tonal character keeps the work grounded, making it sound exotic, rather than beyond the ken.


Perle's String Quartet 8 is more decided atonal in sound, although not entirely so. Perle creates an expressive work with a highly charged emotional atmosphere. Molto Adagio the earliest work on the album (1938), like String Quartet No. 8, seems very much influenced by Schoenberg's Verklärte Nacht. The dissonances are a little sharper in this work, though, giving it a harder edge than the eighth quartet.

The Daedalus Quartet performs these works in a straight-forward, no-nonsense fashion. Vibrato is tightly reigned in, and the ensemble has a clean, precise, transparent sound that admirably serves these works.
Posted by Ralph Graves at 8:00 AM