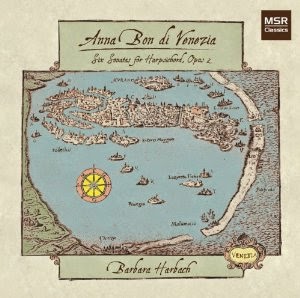 Anna Bon di Venezia is a somewhat mysterious figure -- very little is known about her, save that she, along with her parents (a stage manager and an opera singer) were hired by Count Esterhazy, where (presumably) they worked under his Kappellmeister, Franz Joseph Haydn.

The harpsichord sonatas, published in 1757, are fascinating. To my ears, they sound similar in style to the ones Haydn wrote around the same time. These are short, straight-forward works that are charming in their simplicity. Barbara Harbach performs them with delicacy and authority, bringing out the beauty and elegance of Bon's carefully crafted melodies.

These works, I think, compare favorably to contemporaneous sonatas by more famous composers. Recommended to anyone interested in early classical music.
Posted by Ralph Graves at 9:00 AM