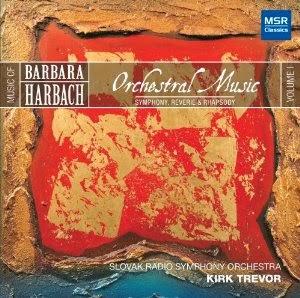 Barabara Harbach is perhaps better known as a pianist and harpsichordist (and a champion of women composers), but this new release shows she's equally accomplished as a composer -- and not just as a composer for the keyboard.

Venerations for Orchestra, is, according to Harbach, is a three-movement symphony celebrating "love, beauty, attractiveness and desire" -- and the veneration of those themes. So it seems. Overall, this is a pleasant work, orchestrated with a soft focus that keeps it a little removed emotionally. Harbach has a gift for evocative melody, and there were some imaginative orchestral touches that made this an attractive work.

As the name suggests, Frontier Fancies for Violin and Orchestra has a vaguely American cast to it. But don't expect distilled Copland. Harbach has her own ideas about what Americana music sounds like. The violin and orchestra maneuver about each other like to protagonists -- or two lovers. Solo violinist Frantisek Novotny makes the most of the gorgeous material Harbach gives him -- especially in the slow movement, "Twilight Dream."

One of Ours - A Cather Symphony was inspired by Willa Cathar's book of the same name. The work conjures up the sprawling plains of Nebraska in its opening movement with the orchestra's wide-open harmonies and soaring melodies. The second and third movements skip to the end of the novel, set on the battlefields of the First World War. But don't expect an overt depiction of war a la Shostakovitch's "Leningrad" symphony. Harbach, like Carther, is more concerned about the emotional effect of the conflict. The symphony ends, not triumphantly, but in an elegiac and life-affirming fashion.

The Rhapsody Jardine for Oboe and String Orchestra is the most adventurous score on the album. The oboist, Cynthia Green Libby, has worked with Harbach before, and is able to bring substantial insight to the score. The melody goes through several transformations, but Libby never lets us lose sight of the thread. Her performance really brings this work to life.

And it also highlights the one flaw with this recording. As good as the Slovak Radio symphony Orchestra is, their performance overall sounds flat, as if they were sight-reading. Using Eastern European orchestras to make a contemporary music recording is common practice these days -- without these relatively inexpensive and competent ensembles, a lot of deserving American music simply wouldn't get recorded. Conductor Kirk Trevor does what he can, but he can't fully compensate lack of adequate rehearsal. I'd love to hear these works done by an American orchestra after playing them in concert.
Posted by Ralph Graves at 9:00 AM