Gliere Symphony No. 3 - An epic journey 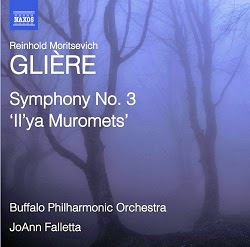 Gliere's sprawling symphony takes the listener on an epic sonic odyssey. From the somber opening bars that foreshadow the arrival of the heroic Il'ya Muromets, to the closing chords where Muromets and his brave Bogatyrs knights are defeated and turned to stone, Giere weaves a tightly-constructed narrative that's both coherent and immersive.

The first recording of this work was with Stokowski, who (with Gliere's permission) trimmed the work down from 70+ minutes to a svelte 38 minutes. Although it's a thrilling performance (it is Stoki, after all), it didn't do the work justice. Because Gliere's third symphony has no filler -- every note is there for a reason, and every note helps further the story.

Others have recorded the complete version of this work, but somehow failed to completely communicate overarching dramatic motion of the music. There are plenty of beautifully written sections that its tempting the linger over, but just as with the organic music of Wagner and Mahler, they're most effective in context.

And JoAnn Falletta understands that context. Her performance with the Buffalo Philharmonic Orchestra is one that delivered new pleasures every time I listened to it. The story for this programmatic work is quite detailed -- but you really don't need to follow it with this recording. Falletta and the BPO effectively paint each scene completely.

The release is beautifully recorded, allowing the listener to hear Gliere's subtle orchestrations. A joy to listen to from start to finish.
Posted by Ralph Graves at 8:00 AM